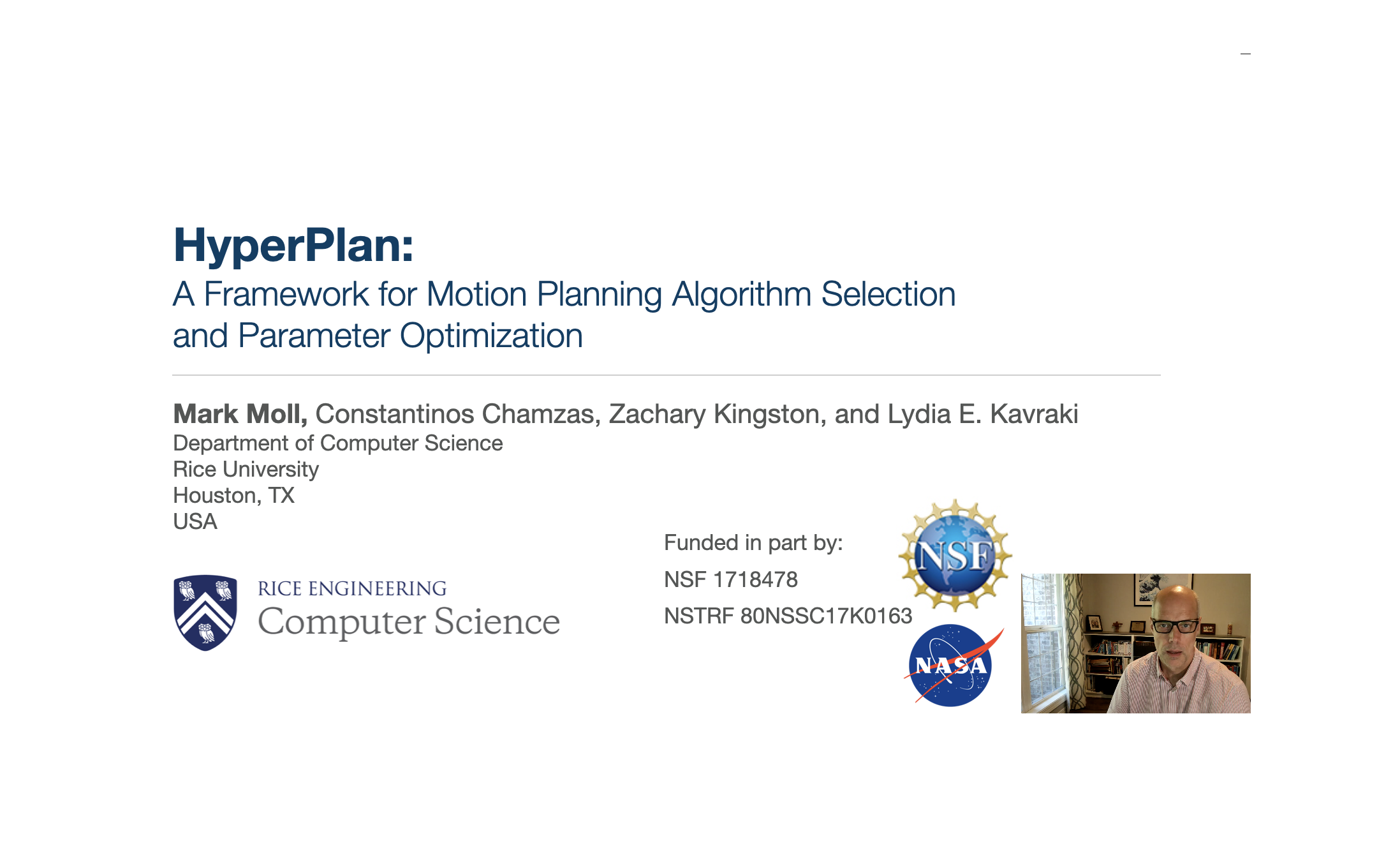 PickNik’s Director of Research, Dr. Mark Moll, maintains a part-time position at Rice University. In this position he has worked on a novel approach for automatically selecting the right motion planning algorithm and tune its parameters for a particular application. This work was presented at the 2021 International IEEE/RSJ Conference on Intelligent Robots and Systems (IROS 2021). The title of the talk is “HyperPlan: A Framework for Motion Planning Algorithm Selection and Parameter Optimization.” The software developed for this project uses OMPL and MoveIt and will eventually be released as open source.

Over the years, many motion planning algorithms have been proposed. It is often unclear which algorithm might be best suited for a particular class of problems. The problem is compounded by the fact that algorithm performance can be highly dependent on parameter settings. This paper shows that hyperparameter optimization is an effective tool in both algorithm selection and parameter tuning over a given set of motion planning problems. We present different loss functions for optimization that capture different notions of optimality. The approach is evaluated on a broad range of scenes using two different manipulators, a Fetch and a Baxter. We show that optimized planning algorithm performance significantly improves upon baseline performance and generalizes broadly in the sense that performance improvements carry over to problems that are very different from the ones considered during optimization.

Mark Moll is the Director of Research at PickNik, a robotics software development and consultancy company that is supporting the MoveIt motion planning framework. He is also a senior research scientist in the Computer Science Department at Rice University. He has worked in robotics for more than 20 years, with a focus on motion planning. He is leading the development of the Open Motion Planning Library (OMPL), which is widely used in industry and academic research (often via MoveIt / ROS). He has over 80 peer-reviewed publications with research contributions in applied algorithms for problems in robotics and computational structural biology. He has extensive experience deploying novel algorithms on a variety of robotic platforms, ranging from NASA’s Robonaut 2 to autonomous underwater vehicles and self-reconfigurable robots.